CURRENT SPACE: This home was owned by an elderly couple, so while it was clean, and neat as a pin, it was also very dated, with stability rails on the walls. The room was quite small, but had fabulous high ceilings. Being on the westerly side of the house, the room remained quite dark until late afternoon. It also lacked good ventilation, and had a large hob into the shower.

CLIENT BRIEF:  My client was a single business woman, and very much wanted a bathroom, personalised just for her. She wanted a touch of glamour with feminine touches, and dreamt of a larger shower. She told me that the shower was the place where she got her thoughts together for the day ahead, so this had to be something to inspire.

COMPLETED SPACE: The completed space found the perfect combination of a natural finish, with soft greens and light timbers, while injecting the wish list of a glamorous chandelier, and zebra stripe mosaic in the shower, and a large rose shower head. The hob was removed for a level shower, and the height of the screen was lifted and extended slightly, to take advantage of the ceiling height, making the space feel larger. The same tile was laid on the floor and taken to ceiling height on the walls, again, making the space feel larger. The plumbing was kept in its current location for budget reasons, but adding a set-back kick on the vanity, made it appear to be floating, giving the illusion of greater floor space, whilst hiding the existing plumbing.Ventilation was installed, and a very large mirror to bounce any available natural light. 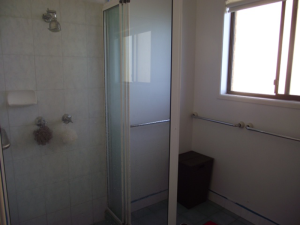 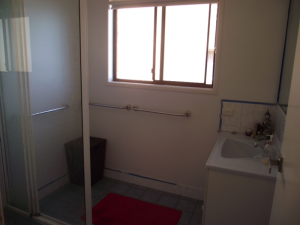 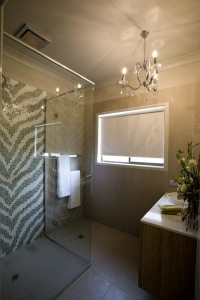 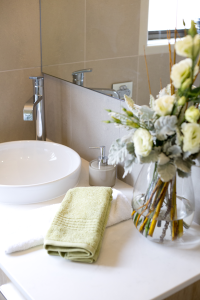 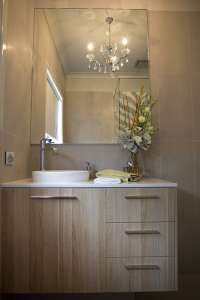